As an Essential Business, we are open for business: providing waterproofing, foundation and mold remediation services with extra health and safety precautions. This includes the use of additional protective gear and new communication technologies to limit – or eliminate – in-person interaction during your estimate with video inspections.
Free Quote
Call the Experts To Give Your Basement The Premier Treatment
All of your Frequently Asked Questions about French Drains are answered - by the experts. Discover the solutions to your water problems. 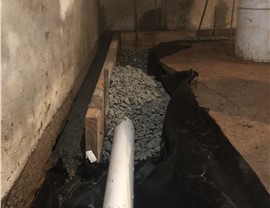 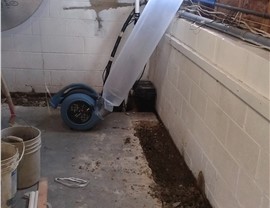 Can an interior French Drain System be installed in my basement without a sump pump? Can French Drain piping discharge into my trap/sewer system?

In some homes there is a sewer trap below the basement floor. This is where your main sewer pipe leads to the exterior sewer system. In theory, a drain system can terminate into this trap area if the main sewer line cap is removed. BUT In most municipalities, it is illegal to discharge a French Drain System into a city sewer. Also, if the sewer backs up- your basement will flood with sewage. If your home is connected to a septic system discharging into your septic system could lead to a complete septic overload.

Installing a perimeter French Drain System is the only correct repair for this situation. A French drain will keep the water table below your basement floor and prevent any further leaking. All French Drain piping should terminate into a sump pit and a quality sump pump should be installed

Can I seal up water that is entering my basement from between the floor and the foundation walls?

No. This problem can only be rectified with the installation of a French Drain System

Can I seal up water that is entering my basement through cracks in the floor?

No. This problem can only be rectified with the installation of a French Drain System

You cannot prevent water from accumulating from under your basement floor! This is the level of the water in the ground in your area. (Known as a high water table) This water table is also at the same level under your neighbors basements. An exterior French Drain System will not prevent this from happening neither. If an exterior or interior drain system was installed, the water level under your basement floor would still be as high as the bottom of the drain system piping.

Do I need to install a French drain around the entire perimeter of my basement if water is seeping between my foundation wall and floor along 1 wall only?

A French Drain System can be installed along 1 wall only-it can also be installed along 2 walls or in a very small area of only 5 ft if needed. Generally, if your basement is leaking along 3 walls, we recommend a full perimeter drain system at this point. French drain system pricing is by the linier foot. If a small system needs to be connected into an existing system, you might pay 3 times the amount per foot on a small job due to the additional set up and preparation time. Again, a partial drain system can be installed and we can always add on to it if needed in the future. Things to consider when requesting a partial perimeter drain system installation .If you are planning to finish off your basement- Installing a French Drain in a finished basement is more costly and more damaging to your basement. Installing these systems in an unfinished basement is much easier and less expensive.

Do I need to remove the wall or drywall in my basement prior to the installation of a French Drain System?

Yes, Drywall will need to be cut about 3Ft high and sometimes the bottom of the stud walls may need to be cut. If your basement walls were built properly, the remaining studs will hang from the top 2 X 4 plate.

If a French Drain System is installed along 1 wall only, will water be push to another section of the basement?

Should my French drain system be installed on the interior (under my basement floor) or on the exterior around the perimeter of my foundation?

On homes that are not under construction, it is always easier and less expensive to install an interior drain system. If you are having a new home built and the building site is set up high and there is an option to run the drain system piping to a low area, then you can install an exterior system. (This is called a gravity drain) We still recommend an interior sump pump for a backup.

Which way should the holes in PVC piping be facing?

The holes in PVC piping should always be facing upward!!! This subject is not open for discussion!! The holes faced upward in the beginning of time and always will face upward. If you or your contractor think any differently-then YOU ARE WRONG!!! I have had a select few try to argue this point with me and Im done wasting my time. I have repaired many systems over, where the holes were facing downward. Minerals, iron bacteria and silt will always settle to the bottom of the drain system trench. Why would you want to place the holes downward? O right, that’s what cleanouts are for. Basement Waterproofing Solutions drain systems do not need cleanouts but we do install them as they are a component of an interior drain system.

How deep should piping be installed on a French drain system?

Iron bacteria/Iron ocher- How do you prevent French drain piping from clogging when iron bacteria/iron ocher is in the water. You will know you have this problem when you see a brownish orange color to the water. It will also stain your floor and sump area and sometimes a thick muck will continue to grow in your sump pit and on the pump. The key to guaranteeing these systems is to prevent the ground water from entering the French drain piping. At Basement Waterproofing Solutions, we excavate our trenches several inched deeper and install a drainage fabric and 3” of gravel in the trench prior to installing the piping. Water will run through the gravel for the first 10 to 20 years before the iron completely clogs up the gravel and reaches the piping. Piping is installed with holes facing upward and clean outs are also installed on each wall. With proper maintenance, your French drain will last a lifetime. If pipe holes are facing downward, your French drain will clog and malfunction prematurely.

Eliminate worry and get your home back in top condition with financing options that include 0% financing!

Superb overall experience from the beginning to finish. 1. Company representative spent enough time to explain issue with excessive water in foundation, origin of iron ochre, and ways to address the issue. He was attentive and did not rush. The representative came back again as a better solution...