As an Essential Business, we are open for business: providing waterproofing, foundation and mold remediation services with extra health and safety precautions. This includes the use of additional protective gear and new communication technologies to limit – or eliminate – in-person interaction during your estimate with video inspections.
Free Quote

For A Limited Time We Are Offering 5% Off French Drains, and Save Up To $1,000 Off Your Pump/Pit! 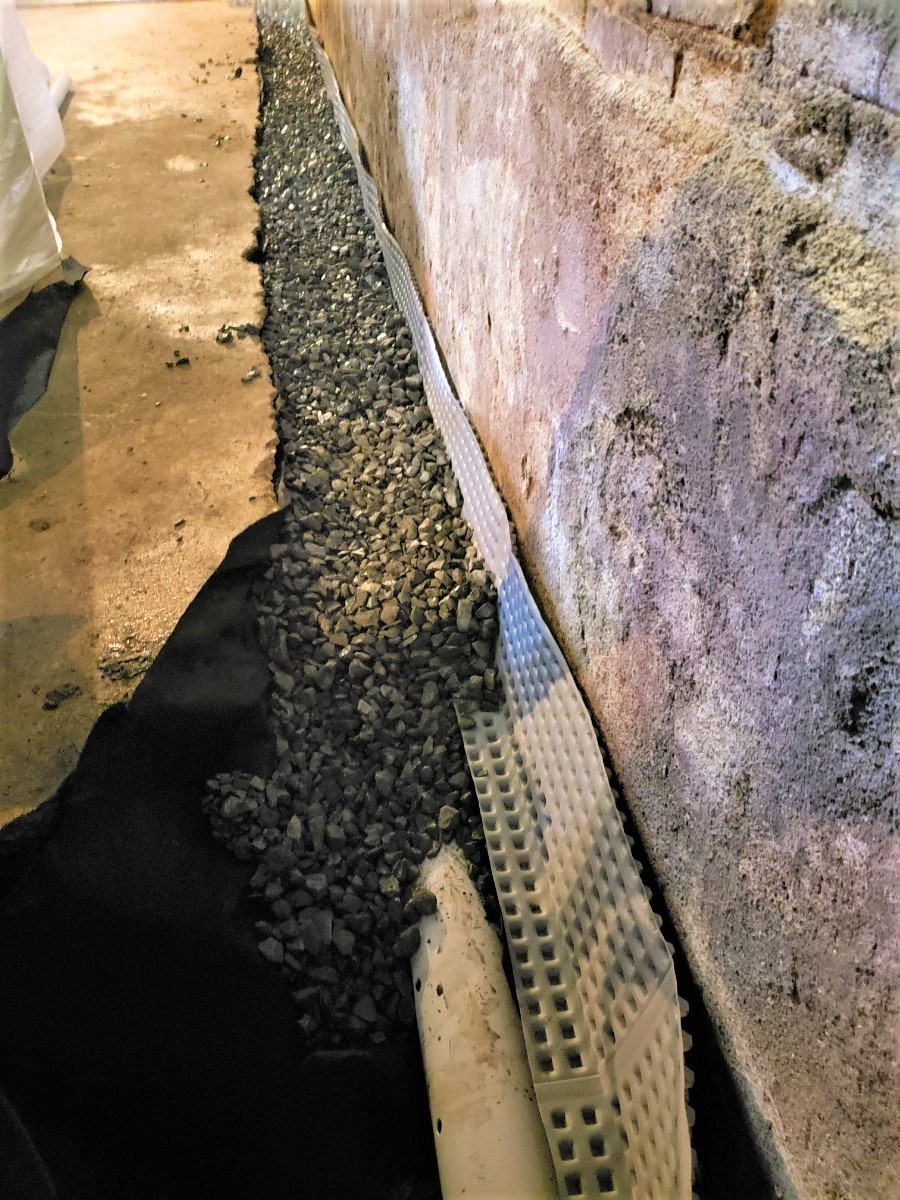 Perforated piping installed around the perimeter of a basement (Either under basement slab or around the exterior of foundations footing) is considered a French drain system. The system should be installed with a minimum of a 3 inch pipe for interior systems and 4 inch for exterior then back filled with clean crushed stone. Piping with small slits is prone to clog with minerals, silt or iron bacteria so this type of piping should be avoided. When using PVC piping, holes should always be facing upward.

This is when rain water saturates the ground and water levels within the ground begin to rise. As the water table rises above the basement floor level, water begins to enter the basement between the foundation walls and floor or through cracks in the floor.

Water tables are usually higher in spring months during winter thaw or during a severe weather event. The only cure for this situation is a French drain System also known as a pressure relief system. No attempt should be made to seal up and hold back Hydrostatic water pressure.

Interior Drain Systems Interior French drain systems should be installed with a minimum of a 3 inch pipe. All piping should be laid next to footing and installed 8 to10 inches deep then back filled with clean ¾ inch crushed stone. When soil conditions are unstable and an abundance of mud or silt is present, proper drainage fabrics should be used prior to pipe installation to prevent piping from clogging. If the foundation is constructed of block, 2 to 3, ½ inch holes should be drilled in every bottom block at or below the floor level. 2 ½ inches of concrete is then poured to complete the system. The system should terminate at a sump pit with an adequate sump pump to handle a maximum amount of water flow for a particular basement

Exterior French Drain Systems Generally exterior systems should only be installed in an area where a home sits up on a hill and piping can be gravity fed to a low-lying area. These systems are typically found in mountainous areas. Some may view these systems to be superior to interior systems due to the fact they do not have to depend on a sump pump for the final water discharge but the exterior discharge piping is prone to clog from erosion and snow pack in the spring and winter months. Other applications for exterior French drain systems can be found in particular neighborhoods where an existing storm drainpipe has been installed. In these situations, the storm drain piping must be 18 to 24 inches below the basement slab so all French drain piping can terminate into the storm drain. These storm drains should not be prone to backups and local zoning laws should be investigated prior to this type of installation.

We have witnessed foundation plans for new homes with piping from an exterior French Drain System terminating to an interior sump pit/and pump. If you are having a new home built and discover this design to your foundation/basement drain system-make your architect change it.

Let’s Get You A Free Quote

Take the first step towards a drier home today by requesting a free, no-obligation quote!